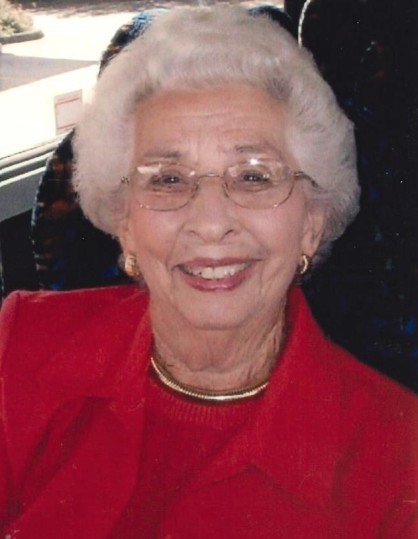 Bennettsville, SC
Sarah Elizabeth (“Lib”) Miller Thompson, age 103, passed away at Morrison Manor, Laurinburg, NC on March 8, 2020. A Celebration of Life will be held at 11 am on Thursday, March 12, 2020 at The First United Methodist Church, Bennettsville, SC, with burial to follow at Sunset Memorial Park. Visitation will be held on Wednesday from 5 pm -7 pm at the home of Wilma Smith, 107 Lakeland Dr., Bennettsville.
Lib was born on a farm on September 24, 1916 in Jefferson, SC. She was the daughter of the late Edwin Jackson and Beulah Parker Miller. She was the next to the youngest child and the sole survivor of a family of four brothers and four sisters. She was predeceased by her beloved husband of 58 years, Robert E. (“Red”) Thompson and her beloved grandson, Robert Christopher Peele.
Lib graduated from Jefferson High School at the age of 15. In 1937, she graduated from Winthrop College of Women (now Winthrop University), in Rock Hill, SC with a Bachelor of Science Degree in Home Economics Education. She taught Home Economics, Biology and Sciences in the public-school system for 22 years in Bishopville, Conway, Durham, NC and Bennettsville, SC.
From the time she was a small girl, Lib loved the thrill of “turning up the soil” with her bare toes, riding behind a mule in their fields, riding horseback and playing long hours with her friends. She started sewing and making her doll clothes when she was six years old and could barely reach the pedals of the sewing machine. As a young girl, she drew house plans with furniture in the sand in her yard. These early talents served her well in later years. She went on to draw the plans for her and Red’s house in Bennettsville, the four renovations to it, and their beach house, “Little Bit”.
Lib’s first teaching position was in Bishopville. It was there that she met Red on a DOUBLE DATE, and he asked her for a date with him at the end of that night. Lib said she fell in love with him that night. They soon became a couple, and they married on July 12,1941, just before Red decided to enlist in the Army. At that time, married women were not allowed to teach in SC. Lib was so valued as a Home Economics teacher, that her superintendent went to the SC Department of Education to request that she be allowed to continue to teach. As a result of his request, the state policy was changed. Lib became the first married teacher in SC.
After Red was discharged from the Army in 1946, they moved to Bennettsville and became the owners/operators of Miller-Thompson Drug Store. They were in business for 34 years. They were both devout Christians, and they joined The First United Methodist Church. Lib was a member for 74 years. She was active in all aspects of the church. She taught Sunday School for both children and adults; was Chairman of the Jennie Belle McRae Circle; President of the United Methodist Women; Chairman of the Administrative Council; Lay Member to the Annual Conference and on numerous church committees.  Lib was also a former President of the Junior Charity League and a Girl Scout leader for many years.
After their retirement, Lib and Red spent 20+ wonderful years at their beach house at Surfside Beach, SC. Their “second church” was The Garden City Chapel, where they volunteered and Red became a lifetime trustee. They became close friends with the minister of the Chapel, the late Rev. Hal Norton.  They traveled extensively, all over the US, Hawaii, and Canada with Rev. Norton’s tours. They made many wonderful and lifetime friendships with their fellow travelers. Lib’s happiest memories at the beach were walking barefooted on the sand with Red and Hal. She also loved reading in the hammock. In her later years, she loved sitting in her sunroom in Bennettsville, watching the clouds and visualizing objects from them.
Lib was an expert seamstress. She made almost all of her daughters’ clothes when they were growing up. She could make anything, from a three-piece suit, to curtains and draperies, and even a wedding dress. If she could not find a pattern for something she wanted to make, she made a pattern. Lib loved all kinds of arts and crafts, and she was a talented interior decorator. She loved working in her flowers at home and at the beach. She was also a wonderful cook. She was famous for her “little biscuits” and her hot milk cakes.
Lib was a wonderful mother, grandmother, aunt and devoted friend. She never met a stranger, and she would do anything for anyone. She was a gracious hostess, and her homes were always open to family and friends. Even in her last days, Lib never lost her wit and sense of humor. A close friend recently said, “What will the world be like without Lib in it?”. She will be dearly missed!
Lib is survived by two daughters, Elizabeth (“Libby”) Shutt (Frank) and Wilma Smith (Ray), of Bennettsville ; grandchildren, Ashley Elizabeth Thompson (Jeremy)of Saluda, NC, Lee Parker Shutt of Bennettsville; Michael Austin Peele (Diane) of Seneca, SC; Raven Grooms (“Hawk”) of Bennettsville ; great-grandchildren, Wesley Montgomery, Katelyn Peele, Allie and Colton Thompson, Piper and Scarlett Grooms ; many nieces and nephews, who were all so dear to her;  her very special friend, Derendia (“Bubba”) Freeman and her very special caregivers, Glenda Sweatt (who was Lib’s devoted caregiver for many years), Rita Locklear, and Linda Driggers, who all took such good care of her.
The family would like to thank the caring and dedicated employees of Hospice of Scotland County and Morrion Manor, Laurinburg, NC.
Memorials are suggested to The First United Methodist Church, P.O. Box 456, Bennettsville, SC 29512, and The Garden City Chapel, 316 Dogwood Drive North, Garden City, SC 29576.