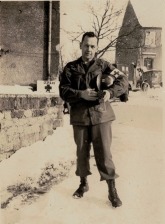 On the 75th anniversary of D-Day, we remember Dr. P.M. Kinney of Bennettsville, who, as commanding officer of the U.S. Army’s 433rd Medical Collecting Company, participated in the landing on Omaha Beach in Normandy, France. His company was assigned to join the initial assault landing with the Army Engineers and treat their injuries, so that the Infantry could follow and land more safely. As he led his medics in assisting both units’ wounded men that day, he was injured by a piece of shrapnel which left a scar on his left wrist. Thank you, Dr. Kinney, and all veterans, for your service!